The Perryville Weekly Union archives have really turned out to be a treasure trove for Southeast Missouri history. The May 15, 1863 edition of the paper reports of Frank Valle capturing capturing local militia members stating:

“Militia Captured – We are informed that on last Sunday evening, while Henry Farrar, Daniel Rhyne and Major Clifton, members of a company of the Enrolled Militia of this county were on their road to Iron Mountain, were captured by Frank Valle and his followers in St. Genevieve county. They were compelled to take the Confederate oath. Their horses were taken or stolen from them when they were set at liberty.” 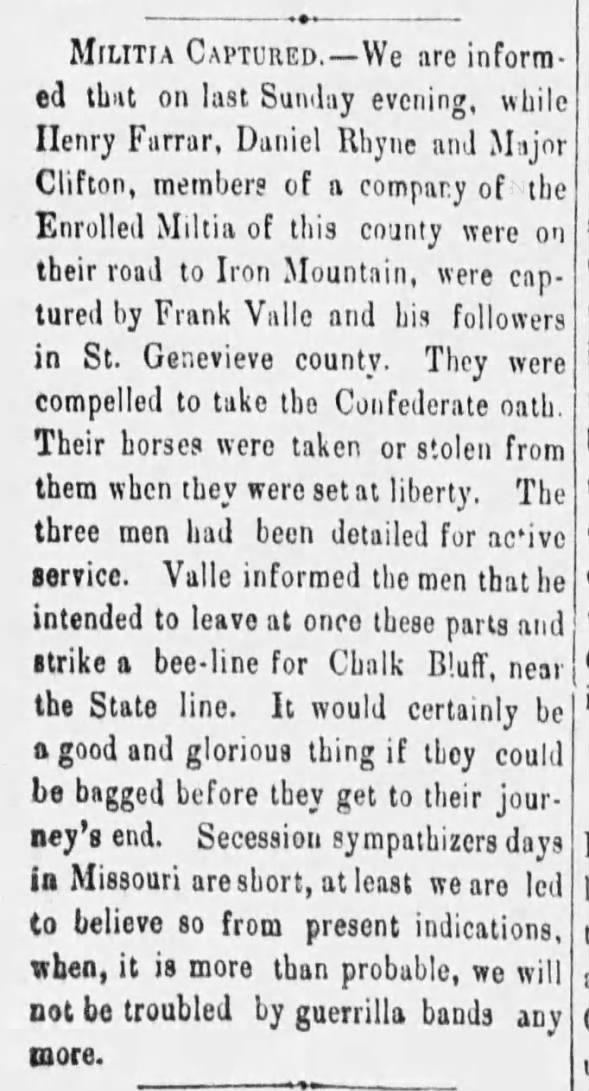 ““We received a letter a few days since from some of our friends in Bollinger county, inquiring of us if Frank Valle was nominated by the Democracy of this county as a delegate to attend the Convention held in St. Louis by the Democracy last month. We say to our friends in Bollinger that Mr. Valle was nominated by some persons of Perry county at that meeting, but we are informed that he did not attend said convention, owing to not having received the news of his nomination.”

A year after its original prediction that Southern sympathies would be short lived, the paper was once again renewing its prediction, though less boastfully:

“Until recently this county has been peaceable and quiet, although a disloyal sentiment to a considerable extent has prevailed, ever since the commencement of the rebellion, and it is hoped, (the disloyalty of the citizens to the contrary notwithstanding ) that order and peace would not be disturbed. Many who saw, or thought they saw, into the future, predicted that peace would be of short duration. They argued thus wise , although many of the leading secessionists have much to lose, and fear to lose it, they will so manage to get all the evil disposed men of the community fully enlisted in the rebellion, that, by harboring Frank Valle and his gang, who have been frequently seen at houses of wealthy secesh by giving aid, comfort, information, and assistance to the enemies of the country, and fully assuring them of their co-operation and assistance.”

Support independent media by purchasing a Foothills Media baseball cap. 100% cotton, fully adjustable, one size fits all. This cap features our trademark Foothills Media logo on the front and our web address (www.foothillsmedia.net) on the back.