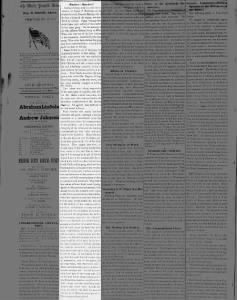 The July 8, 1864 issue of the Perryville Weekly News (Perry county, Missouri) paid special attention to inquiries from Bollinger County, to its paper seeking information pertaining to whether or not a Perry county resident by the name of Frank Valle had been nominated to the state convention. According to the paper:

“We received a letter a few days since from some of our friends in Bollinger county, inquiring of us if Frank Valle was nominated by the Democracy of this county as a delegate to attend the Convention held in St. Louis by the Democracy last month. We say to our friends in Bollinger that Mr. Valle was nominated by some persons of Perry county at that meeting, but we are informed that he did not attend said convention, owing to not having received the news of his nomination.”

In a related article published in the same issue of the Perryville Weekly News, the paper reported:

“Until recently this county has been peaceable and quiet, although a disloyal sentiment to a considerable extent has prevailed, ever since the commencement of the rebellion, and it is hoped, (the disloyalty of the citizens to the contrary notwithstanding ) that order and peace would not be disturbed. Many who saw, or thought they saw, into the future, predicted that peace would be of short duration. They argued thus wise , although many of the leading secessionists have much to lose, and fear to lose it, they will so manage to get all the evil disposed men of the community fully enlisted in the rebellion, that, by harboring Frank Valle and his gang, who have been frequently seen at houses of wealthy secesh by giving aid, comfort, information, and assistance to the enemies of the country, and fully assuring them of their co-operation and assistance. They would soon set up a Union howl, croak loyalty, and impose on the ignorant and unwary, foist themselves onto the councils of the loyal; and by false representations, thrust themselves into important decisions, both civil and military, proclaim that the radicals are the enemy of the country and invite their confederates to the country and rob and murder at pleasure. As a part of the programme, the militia of this county, especially the “Dutch” were to be disarmed, the enrolled militia, as much as possible to be under the control of con’s, (you can make that word confederates if you like, just as well to mean conservatives)”

There are a few key items to point out in this article. The first is that German immigrants were often referred to as “Dutch” and were loyal to Abraham Lincoln and the Union. The radicals of the era , as they referred to themselves, imposed harsh treatment of Southern sympathizers both during and after the war. In fact, after the war, they turned on the Germans.

Other notable subjects of this article were Peter (Pete) Fisher, a Bollinger county resident who led an irregular Confederate cavalry unit during the war.

Foothills Media has a limited quantity of signed copies of “Blood in the Ozarks: Expanded Second Edition”. The book contains over 300 pages of information documenting Civil War atrocities in Missouri with a special emphasis on Southeast Missouri. Official records, newspaper accounts, the testimony of former slaves and personal stories were utilized to document this story.