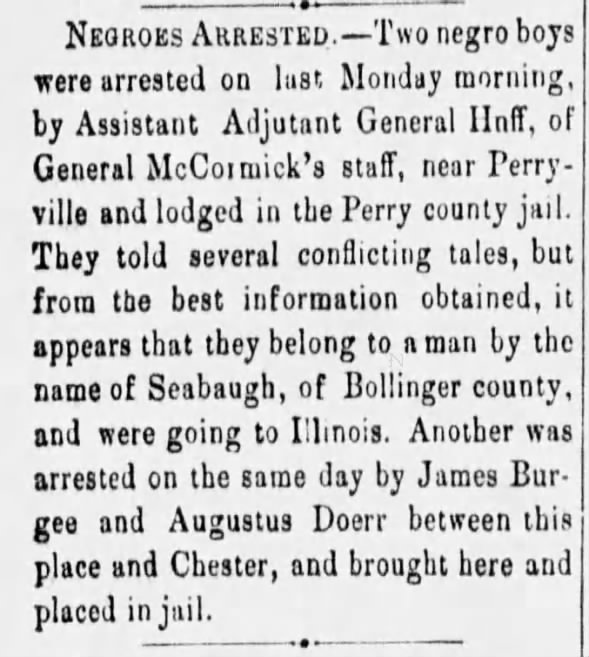 Most of us were probably taught that the American Civil War was fought over slavery. In reality, the reasons for the war were far more complicated. Abraham Lincoln issued the emancipation proclamation on January 1, 1863. This was done for political purposes.

“President Abraham Lincoln issued the Emancipation Proclamation on January 1, 1863, as the nation approached its third year of bloody civil war. The proclamation declared “that all persons held as slaves” within the rebellious states “are, and henceforward shall be free.”

In short, Lincoln’s proclamation only freed slaves in areas that the Union did not control.

In 1863 Perry County, Missouri was by and large controlled by Union authorities. Therefore, it is not surprising that the May 15, 1863 edition of the Perryville Weekly Union reported the following:

“NEGROES ARRESTED- Two negro boys were arrested last Monday morning, by Assistant Adjutant General Huff, of General McCormick’s staff, near Perryville and lodged in the Perry county jail. They told several conflicting tales, but from the best information obtained, it appears that the belong to a man by the name of Seabaugh, of Bollinger county, and were going to Illinois. Another was arrested on the same day by James Burgee and Augustus Doerr between this place and Chester, and brought here and placed in jail.”