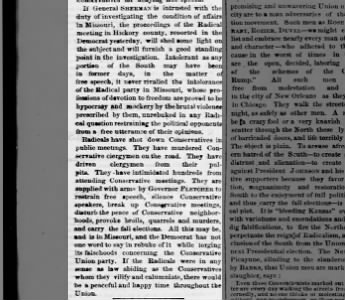 In my previous post “Frank Valle: A Perry County Secessionist That Bollinger Countians Wanted to Elect” I noted that:

“The radicals of the era , as they referred to themselves, imposed harsh treatment of Southern sympathizers both during and after the war. In fact, after the war, they turned on the Germans.”

Proof of this can be found in the August 11, 1866 edition of the Daily Missouri Republican newspaper which published the following account of Radical Republican rule in Missouri:

“Intolerant as any portion of the South may have been in former days, in the matter of free speech it never rivalled the intolerance of the Radical party in Missouri, whose professions of devotion to freedom are proved to be hypocrisy and mockery by the brutal violence prescribed by them, unrebuked in any Radical question restraining the political opponents from a free utterance of their opinions.”

Radicals have shot down Conservatives in public meetings. They have murdered Conservative clergymen on the road.

Blood in the Ozarks: Expanded Second Edition uses official records, newspaper accounts, personal stories and interviews of former slaves to tell the story of Union atrocities against Southern sympathizers and civilians in Missouri during the War Between the States. We have a limited quantity of signed copies available. Price includes shipping and tax.