On the September 13, 1929 the Republic Tribune (Union, Missouri) carried a lengthy article about the Will Mayfield College stating that:

“Due to hard times in the Mississippi Valley the Will Mayfield College of Marble Hill, Missouri had some hard struggles this last year and there was some doubt in the minds of many as to the future of Will Mayfield.”

Despite the doubt of many about the forthcoming year the headline of the paper read “Will Mayfield College Opened With Fine Attendance.”

According to the paper, a man by the last name of Salisbury had went to another farmer’s residence and “cooly called him out”, informing him that he was going to kill him. Salisbury shot the farmer in the leg, demanded he stand back up and delivered a second fatal shot. The paper reported that the murder had taken place seven years prior and was said to be over a dispute of stock.

Salisbury then traveled to Kansas and was ultimately tracked down when he sold his property in Missouri. He was also suspected of taking part in another murder in Kansas. 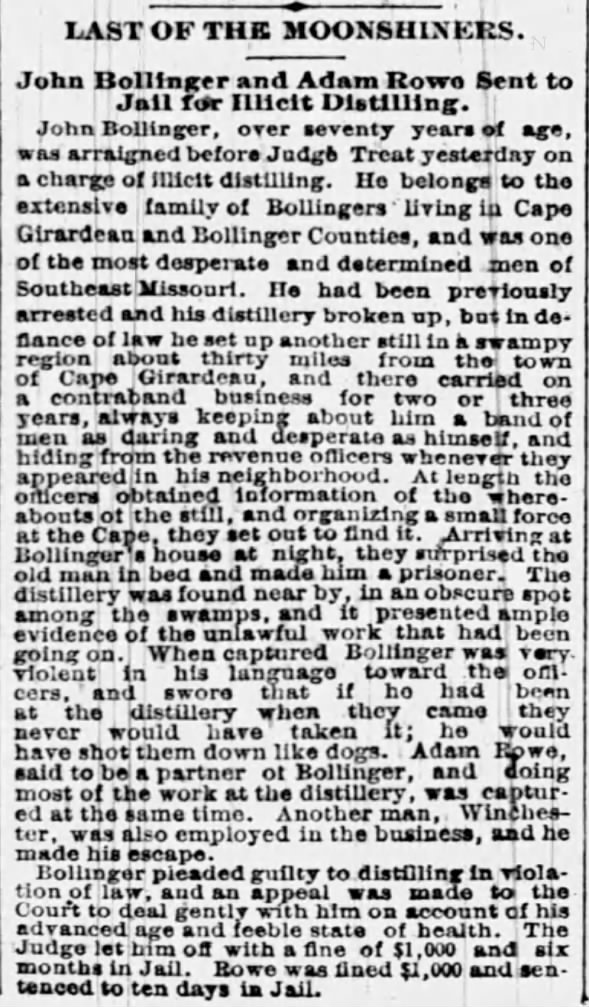 In post-war Bollinger County, Missouri lawlessness prevailed. It seems with little opportunity many turned to distilling corn liquor or “moonshine”. Before the war it was not illegal to do so but after the war it was considered to be against the law due to the fact that the government did not get “its share” through taxation.

There are several accounts in newspaper archives from throughout the United States about the crackdown on illegal distilleries in the county. It was not uncommon for federal authorities to make appearances and arrests.

It was also not uncommon for the citizens to intervene in the apprehension of moonshiners. Sometimes they were successful, other times not so much. The May 22, 1871 issue of the Chicago Tribune carries the story of an unsuccessful attempt to free prisoners from Federal authorities. 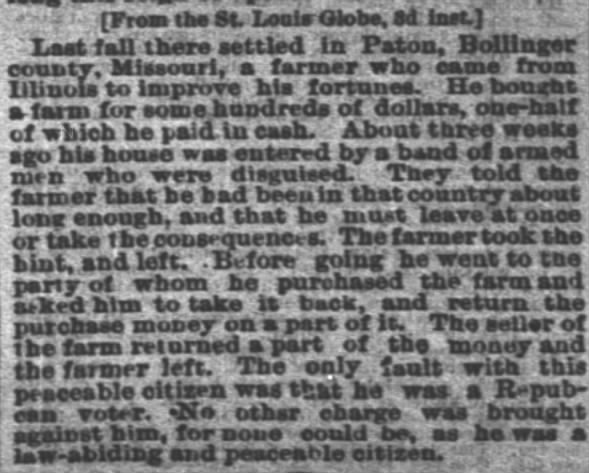 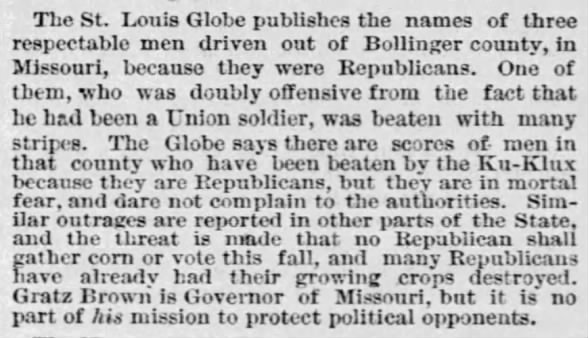 Lancaster, Pennsylvania’s Journal Intelligencer newspaper carried news of a string of robberies being committed in Bollinger County, Missouri in its May 29, 1868 issue.

The paper stated that the perpetrators wore masks and Union overcoats and stated it was probably some of “Logan’s GAR’s”.

I knew who “Logan” was. The paper was referencing Union General John A. Logan (from Southern Illinois), he founded the Grand Army of the Republic in 1868, which was a fraternal organization for Union veterans of the Civil War.

The paper in its statement that the robbers were probably some of “Logan’s GAR’s was a reference to the organization in general. Army History {.org} states that:

“Following the Civil War, Logan was instrumental in the founding of the Grand Army of the Republic (GAR), a veterans group comprised of former Union Army soldiers, and served as the GAR’s second elected national commander; General Stephen Hurlburt was the first commander in chief of the GAR.  On 3 March 1868, Logan issued General Order No. 11, which called for a national day of remembrance for Civil War dead.  This order served as the basis for what became the national holiday of Memorial Day.”

The date was May 30, 1889 and both Union and Confederate veterans gathered in Marble Hill, Missouri to join in a memorial to those who had died in the Civil War. The July 11, 1889 edition of the Erie Sentinel reported that Sons of (Union) Veterans Camp #50 fired the salute (with blank cartridges). Afterwards the Union and Confederate veterans went to the Bollinger County courthouse to continue the service. It was at this time that the members who fired the salute, brought their rifles in the courthouse and were arrested because of it. While the paper states it was Sons of Veterans Camp #50, an Sons of Union Veterans newsletter lists the men as being members of Thomas Fletcher Camp #56.

The August 23, 1925 issue of the St. Louis Globe-Democrat covered the counties of Southeast Missouri in its “Travelog” series of the state. Included in the article is a substantial article about Bollinger County and William Mayfield, who the Globe described as “the County’s leading citizen” and “after many hearbreaking experiences and tribulations finally succeeded in founding the Will Mayfield College there.”

The Globe, in its coverage of the counted also painted a picture of what it was like to live in the county during the Civil War.

Mayfield Part. 3 Sun, Aug 23, 1925 – 19 · St. Louis Globe-Democrat (St. Louis, Missouri) · Newspapers.com
Processing…
Success! You're on the list.
Whoops! There was an error and we couldn't process your subscription. Please reload the page and try again.

The July 5, 1928 edition of the Wayne County Journal-Banner carried the story of the [then] upcoming dedication of the Sam A. Baker State Park, even Missouri Governor Sam A. Baker was slated to speak at the event.

The park is an old favorite destination to many of us in the Eastern Ozarks and the story contains accounts of early settlers of Wayne County, the Civil War (including General Sterling Price’s 1864 raid) and the location of “Rocky Battery”, which I have been wondering about since reading Paulette Jiles’ 2003 book “Enemy Women.”

The June 1, 1917 edition of the Natchez Democrat (Natchez, Mississippi) reported on the deadly storms that passed through Southeast Missouri and Southern Illinois. The paper reported that the storm did the most damage in Wayne and Bollinger Counties, with the heaviest loss in Zalma where 25 lives were lost and 200 injured.