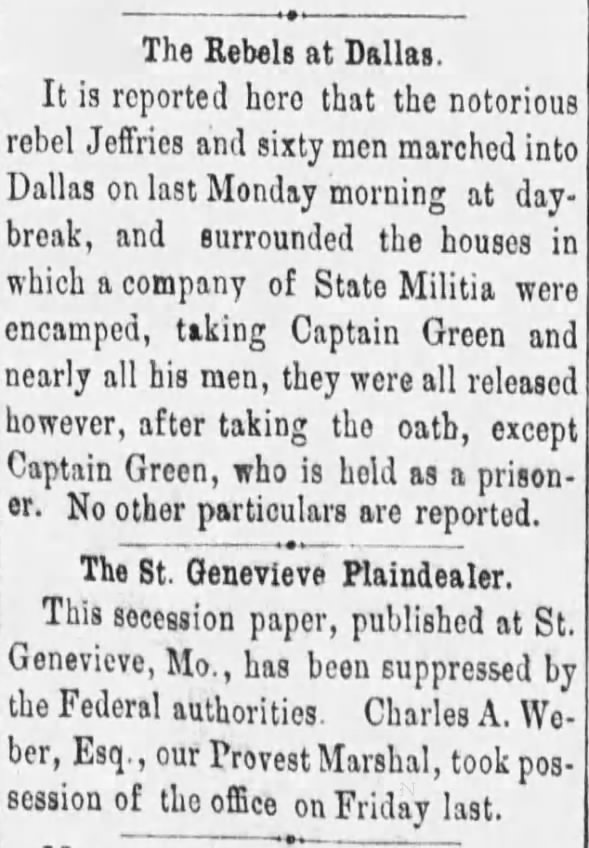 The August 23, 1862 edition of the Perryville Weekly Union reports that Colonel Jeffers (of the 8th Missouri Cavalry, CSA ) entered Dallas with around sixty men and surrounded several homes in which members of the Union state militia were encamped. The paper also reported that all were released on oath except their commander Captain Green, who was taken prisoner. The Perryville Weekly Union labeled Jeffers (who they incorrectly referred to as Jefferies) as a “notorious” rebel (which is also incorrect). Colonel Jeffers was an officer in the regular Confederate army and conducted himself honorably both during and after the war.

It was not uncommon for newspapers at the time to label Confederates as “rebels”, “guerrillas” or “bushwhackers.” Of course, any paper who did not utilize this practice ran the risk of being closed down under orders of the Lincoln administration. An example of this can also be found in the same edition of the Perryville Weekly Union which printed the following:

This secession paper, published at St. Genevieve, Mo., has been oppressed by the federal authorities. Charles A. Weber Esq., our Provost Marshall, took possession of the office Friday last.”