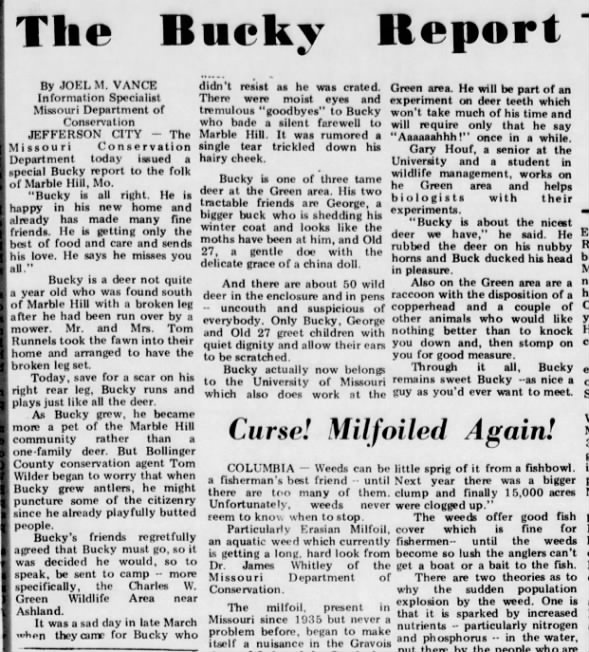 The May 14, 1969 issue of The Daily Standard newspaper (Sikeston, Mo.) published an update on “Bucky” a deer that had been injured near Marble Hill, Missouri and rescued by a local couple. The “Bucky Report” appeared in newspapers across Missouri.

The “Bucky Report” provided the latest updates on the deer as well as a bit of background on the circumstances that made the deer famous:

“Bucky is all right. He is happy in his new home and already has made many fine friends. He is getting only the best of food and care and sends his love. He says he misses you all.

Bucky is a deer not quite a year old who was found south of Marble Hill with a broken leg after he had been run over by a mower. Mr. and Mrs. Tom Runnels took the fawn into their home and arranged to have the broken leg set.”

“As Bucky grew , he became more of a pet of the Marble Hill community rather than a one – family deer. But Bollinger County conservation agent Tom Wilder began to worry that when Bucky grew antlers, he might puncture some of the citizenry since he already playfully butted people.

Bucky’s friends regretfully agreed that Buck must go, so it was decided he would, so to speak, be sent to a camp- more specifically, the Charles W. Green Wildlife Area near Ashland.

It was a sad day in late March when they came for Bucky who didn’t resist as he was crated. There were moist eyes and tremulous “goodbyes” to Bucky who made a silent farewell to Marble Hill. It was rumoured a single tear trickled down his hairy cheek.”