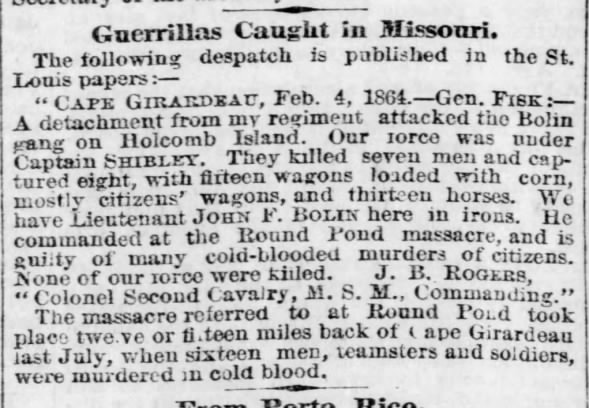 The February 10, 1864 edition of the Philadelphia Inquirer carried the news of John Bolin’s capture on Holcomb Island, the many papers mistakenly reported Holcomb was “near” Cape Girardeau, Missouri , it is much farther South.

The paper reported that Union forces killed seven and captured eight of Bolin’s command (including Bolin himself) and were taken to Cape Girardeau. The paper also noted that Bolin was present at the Round Pond Massacre, where a Union wagon train was encamped for the night.

Round Pond, near present day Delta, Missouri, lay along the Cape Girardeau to Bloomfield Road. The spring-fed pond was a popular location for travelers along the road to camp for the night.

In a dispatch from Colonel J.B. Rogers to General Fisk, published in the February 8, 1864 edition of Louisville, Kentucky’s “The Courier-Journal” Roger’s writes:

We have Lieut. John F. Bolin here in irons. He commanded at the Round Pond Massacre and is guilty of many cold-blooded murders of citizens. Let me convene a commission and try him here, as all the witnesses are here. The feeling here is intense against him being sent away for trial.”

It is interesting that Colonel J.B. Rogers referred to Bolin as a “cold-blooded murderer” as Rogers was accused of war-crimes himself. (Read “Who Murdered the Patterson Family” by clicking this link)

Before Bolin could be tried, a group of citizens and soldiers broke him out of the cell he was being held in and executed him.

We have a limited quantity of SIGNED copies of “Blood in the Ozarks: Expanded Second Edition”. Over 300 pages which cite official records, newspaper accounts, interviews of former slaves and personal stories to document Civil War atrocities in Missouri (with an emphasis on Southeast Missouri). Price includes shipping and tax.