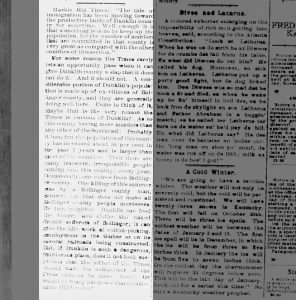 From the late 1800’s through the early 1900’s it was not uncommon for rival newspapers to take lighthearted jabs at each other from time to time but an article found in the October 29, 1897 Dunklin Democrat newspaper revealed a feud between two papers that was anything but lighthearted, in fact, it was down right nasty.

“The tide of immigration has been moving toward the productive lands of Dunklin county for some time. Well enough it is that something is done to keep up the population for the number of murders that are committed in that county is very great as compared with other counties of this section.”

The Dunklin Democrat returned the fire by publishing:

“For some reason the Times rarely lets an opportunity pass when it can give Dunklin county a slap that it does not do it. And it should not. A considerable portion of Dunklin’s population is of ex-citizens of Bollinger county, and they are doing well here. Come to think of it, maybe that is the very reason the Times is envious of Dunklin?”

The Dunklin Democrat went on to state that Dunklin county had grown by 50% in seven years and that are large number of transients had passed through.

The Dunklin Democrat ended the article with the following salvo:

“If Dunklin is such a dangerous, murderous place , does it not look suspicious that the editor of the Times should want his competitor of the Press induced to move here? Or would he really like to see that troublesome Hill leveled?”

Support independent media by purchasing a Foothills Media baseball cap. Stylish and comfortable, 100% cotton with adjustable strap. Features our trademark Foothills Media logo on the front and our web address on the back.