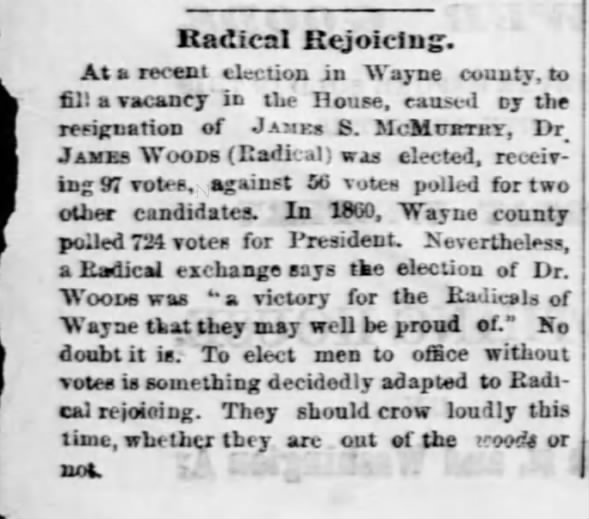 The December 30, 1867 St. Louis Daily Missouri Republican carried the story of something Americans in 2021 are all too familiar with, stolen elections.

The paper reported that in Wayne County, Missouri:

“At a recent election in Wayne County to fill a vacancy of the House, caused by the resignation of James S. McMurtry, Dr. James Woods (radical) was elected, receiving 97 votes, against 56 votes polled for two other candidates. In 1860 Wayne County polled 724 votes for President. Nevertheless, a Radical exchange says the election of Dr. Woods was “a victory for the Radicals of Wayne , that they may well be proud of.”

No doubt it is. To elect men to office without votes is something decidedly adopted to Radical rejoicing.

They should crow loudly this time whether they are out of the woods or not!”

Support Independent Media by purchasing this 100% cotton, one size fits all, adjustable cap. This item features the Foothills Media trademark logo on the front and the site’s web address on the back.

2 thoughts on “Stolen Elections Are Nothing New”