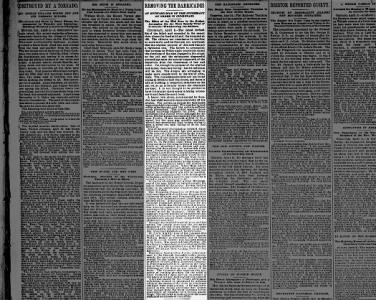 With the events that transpired in Washington, D.C. on January 6, 2021 still fresh in the minds of the public, I thought it would be a good time to remind everyone that , despite the “shock” of our Congress and Senate, it is not uncommon for citizens to take to the streets when they feel justice is not being served.

Although, details are vague, it appears that at one time Cincinnati, Ohio had a problem providing those who had been held in their jail, with a speedy trial. In fact, the problem became so bad that citizens rioted. The riots became so bad that the Ohio National Guard was deployed.

According to the paper the riots resulted in 45 killed and 188 wounded. Yet the paper states that:

“The citizens are unanimous in wanting no more mobs, and yet they are not convinced that the original purpose of the mob was not a righteous one.”

Meaning that while they didn’t want more rioting, they believed those committing the act were justified. It is interesting to note that as a result of the riot, the judges were making arrangements to conduct more speedy trials, and the commissioners were looking into building a structure in which more court proceedings could be held.