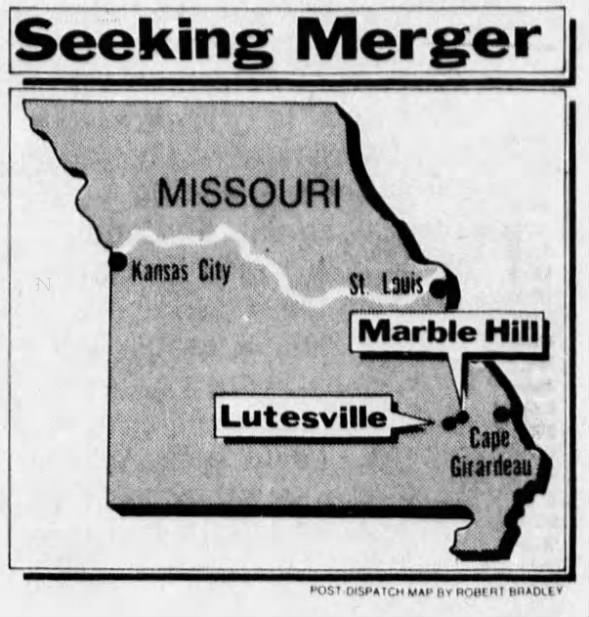 The February 17, 1986 edition of the St. Louis Post-Dispatch reported on the possible merger of the towns of Lutesville and Marble Hill, Missouri. The two tiny towns separated only by Crooked Creek were probably unfamiliar with the vast majority of its readers.

“In a move to blend progress with local sensibility, two adjacent towns in southeastern Missouri are seeking to merge without either one having to give up its name.

The two are Lutesville and Marble Hill in Bollinger County. They propose to achieve their compromise with an old trick of punctuation- the hyphen. Assuming the voters approve, the new town will be Lutesville- Marble Hill, population 1466.”

The proposed name of Lutesville- Marble Hill was the result of a compromise, as residents of Lutesville were concerned about losing their town’s identity.

The Post-Dispatch also reported that:

“Commission members have said a merger would make the area more attractive to industries. International Hat Co., the area’s largest employer, employs about 135 in its plant in Lutesville.

In the years since the article was written, Lutesville lost its identity (the only trace of it being Lutesville Ford) and both towns lost the hat factory and most recently the airport.