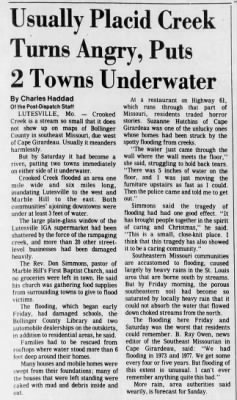 In early December, 1982 the towns of Lutesville and Marble Hill were devastated when area flooding caused Crooked Creek to overflow its banks and entered local homes and businesses. The flooding was so severe it made the headlines of the St. Louis Post-Dispatch in its December 05, 1982 edition which reported:

“Lutesville- Crooked Creek is a stream that is so small that it does not show up on maps of Bollinger county in southeast Missouri, due west of Cape Girardeau. Usually it meanders harmlessly.

But by Saturday it had become a river, putting two towns on either side of it under water. Crooked Creek flooded an area one mile wide and six miles long, inundating Lutesville to the west and Marble Hill to the east.”

The Post- Dispatch reported that downtown Lutesville and Marble Hill was under at least three feet of water, the force of which was so strong it shattered the windows of the local IGA grocery store, leaving the communities without food.

The local pastor of the First Baptist Church, Don Simmons stated that his congregation was collecting food for those who were effected by the flooding.

Also quoted in the Post-Dispatch article was Southeast Missourian newspaper editor B. Ray Owens who stated:

“I can’t ever remember anything [flooding] quite this bad.”

Foothills Media has a limited supply of signed copies of Blood in the Ozarks: Expanded Second Edition for $20.00, which you can either purchase through PayPal or , locally by calling 573.208.6868