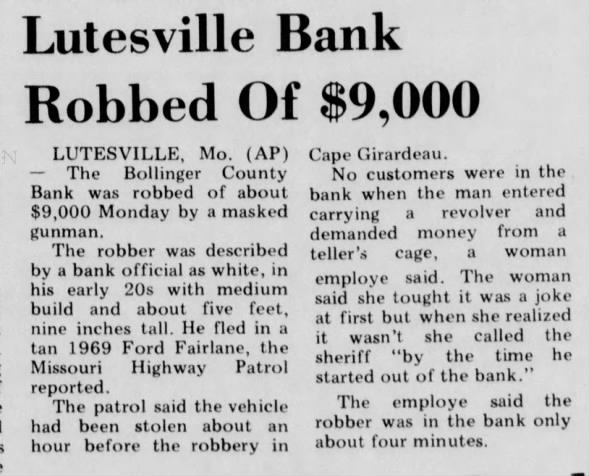 The May 23, 1972 issue of The Daily Standard (Sikeston, Missouri) reported the robbery of the Bollinger County Bank the previous day. According to the paper a masked gunman entered the bank with a revolver and demanded the teller empty her cash drawer. The teller stated that she thought it was a joke at first and described the robber as being white, in his early 20’s, medium build and about five feet, nine inches tall. The suspect was driving a tan 1969 Ford Fairlane which was later discovered to be stolen from Cape Girardeau an hour before the robbery, the suspect got away with approximately $9,000.00.

On July 25, 1972 The Daily Standard reported that most of the $9000.00 (the actual amount stolen was $9,410.00) had been recovered and that the main suspect in the case was being held in the Bollinger County jail. The paper identified the suspect as Robert Chase of Chicago, Illinois. Chase had been freed from a Wisconsin prison a year early after serving a portion of a ten year prison sentence for robbery.

Chase led police where he had hid the money, which turned out to be two miles south of Crump on Route U near the Cane Creek bridge. The money was found in an overnight bag, along with the 38 caliber pistol he used in the robbery and 44 extra bullets.

The Daily Standard ended the story as follows:

“A car stolen the day of the robbery in Cape Girardeau and positively identified as having been used in the crime was found in the woods weeks after Chase was arrested. But no evidence could be gleaned from the vehicle, officers said.

After the recovery of the loot and other items, Chase made a full confession to the deputies, Trooper Kenneth Howell, Bollinger County Prosecuting Attorney Kenneth Shrum and FBI agent Douglas Rosenberger.”