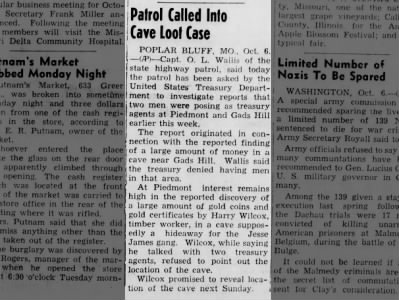 The October 6, 1948 The Daily Standard newspaper (Sikeston, Missouri) reported the curious case of a large cache of gold coins and certificates in a cave near Gads Hill, Missouri. Gads Hill, is the site of the James Gang train robbery in 1874.

“Captain O.L. Wallis of the state patrol , said today the patrol has been asked by the U.S. Treasury Department to investigate reports that two men were posing as treasury agents at Piedmont and Gads Hill earlier this week.

The report originated in connection with the reported finding of a large amount of money in a cave near Gads Hill. Wallis said the treasury denied having men in that area.

At Piedmont interest remains high in the reported discovery of a large amount of gold coins and gold certificates by Harry Wilcox, timber worker, in a cave , supposedly a hide away for the James Gang. Wilcox, while saying he talked to two treasury agents, refused to point out the location of the cave.

Wilcox promised to reveal the location of the cave next Sunday.”

Autographed copies of “Blood in the Ozarks: Expanded Second Edition”

Foothills Media has a limited supply of signed copies of our book “Blood in the Ozarks: Expanded Second Edition” which documents atrocities that occured in Southeast Missouri during the Civil War. Official records, newspaper accounts, interviews with former slaves and personal stories have been used as the basis for this book.