The December 5, 1878 edition of the St. Louis Post-Dispatch carried an article titled “Shaking in Their Boots”, detailing the appearance of five men appearing before the U.S. Court.

Two of the five were from Bollinger County, Missouri and they did not appear to be shaking in their boots. 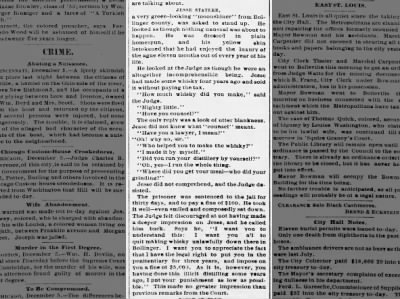 Jesse Statler was described by the paper as , “a very green looking moonshiner from Bollinger County.”

“He looked as if nothing unusual about to happen. He was dressed in plain homespun, and his yellow skin betokened that he had enjoyed the luxury of the ague eleven months out of every year of his life.

He looked at the judge as if he was an altogether incomprehensible being. Jesse had made some whiskey four years ago and sold it without paying the tax.

“How much whiskey did you make?” said the judge.

Jesse did not know what “counsel” meant.

“Have you a lawyer.”

“Who helped you make the whiskey.”

“Did you run your distillery by yourself?”

The judge then asked Jesse where he got his (corn) meal. The paper stated Jesse did not comprehend the statement so the judge “desisted” and sentenced Jesse to thirty days in jail and a $100 fine.

This didn’t seem to have an impact on Jesse so the judge called him back up to the stand in an attempt to make him realize the gravity of the situation by letting him know that he was sending a message that he wanted the distilling of whiskey in “Bollinger” to stop and emphasizing the fact that he could have sentenced him to a term of three years in prison and a $5000.00 fine. The judge then told Jesse Statler that he gave him the most lenient sentence possible but as the paper stated, it had no impact on the man.

Jacob Statler was then brought before the judge. Because he was charged with working for someone else distilling whiskey, he was sentenced to one day in jail and a $1000.00 fine. When the judge asked Jacob if he had a family , Jacob answered by stating “yes”. When the judge asked how many , Jacob Statler’s answered by stating “only nine”. This surprised the court given the fact that he was only 30 years old. 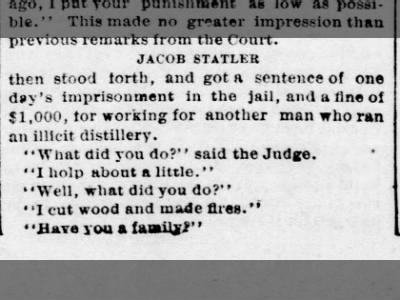 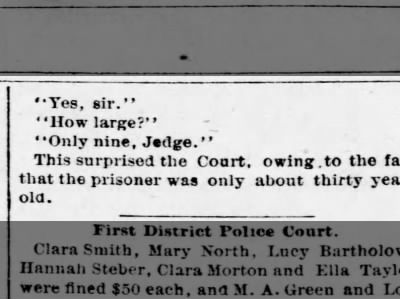 We have a limited supply of signed copies of “Blood in the Ozarks: Expanded Second Edition”. The book details Civil War atrocities which occurred in Missouri with an emphasis on Southeast Missouri. Official records, newspaper accounts, interviews with former slaves and personal accounts all went into the research of this book.